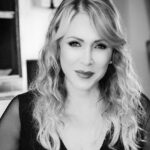 Born in Rome, after concluding High School in Classic studies, she attended the Faculty of Philosophy at La Sapienza University and Singing at the Santa Cecilia Conservatory, where she graduated with top marks.

She wons several International Singing Competitions, such as the “Vincenzo Bellini” in Caltanissetta, the “Francesco P. Neglia” in Enna, “Toti dal Monte” in Treviso, “G. Verdi di Parma” and is fianalist of  “Maria Callas-voci nuove per la lirica”. The juries included personages of the opera world and artists such as Giuseppe di Stefano, Alfredo Kraus, Giulietta Simionato, and Giorgio Vidusso .

She has performed in prestigious theatres and Cultural Institutions such as the Teatro Comunale of Firenze, The Teatro Regio di Parma, the San Carlo in Napoli, the Giuseppe Verdi in Trieste, the Carlo Felice in Genova, the Teatro Comunale of Treviso, Sala Verdi in  Milano as well as the Roma and Napoli RAI Auditoriums with illustrious conductors, among which G. Sinopoli, R. Bonynge, P. Maag, P. Bellugi, E. Plasson, A. Östman, Lü Jia and L.R. Salomon.

She has recorded for Vatican Radio, Deutsche Grammophon, and for the Bongiovanni Inedita series, interpreting the N.Vaccaj’s cantata for soprano and orchestra Andromeda, and A. Vivaldi’s opera Ottone in Villa.

She holds master classes in Italy and abroad at Institutions as:

In 2016 she holds a masterclass on the work of G. Puccini, at the “Escuela Superior de Canto de Madrid” – Spain, where she was again invited in March 2019. In July 2018 she held a masterclass for the Soai University in Osaka, scheduled also for summer 2019.

Since 2013 she holds in Italy the workshop “Bottega Lirica” in collaboration with the Conductor L. Rafael Salomon, first for the European Academy of Villa Bossi, then at the Teatro Comunale of Caldarola, and for the Sangemini Academy. The 2019 edition wil be held at the Teatro Sociale di Amelia (Terni)

Many her students are winners of International Competitions and have  undertaken artistic activity.

Among these Sae Kyung Rim, graduated under her guidance at the G. Verdi Conservatory of Milan (Madama Butterfly and then Aida in the homonymous operas represented in the last season 2017, at the Arena di Verona). Rudy Park, graduated with her at the Santa Cecilia Conservatory (Calaf in Turandot at the Sferisterio di Macerata, last summer, 2017), as Jiyoung Yeo, (Königin der Nacht at the Sung-Nam Opera in South Korea in May 2017).

The 2012 edition of the “Premio delle Arti”, competition reserved to the students of all italian conservatoires, has seen as the winner  of the absolute first prize of Canto section, her student Li Keng.  In the the edition 2013 of the same Competition, her student  Jessica Loaiza Perez, has received a special mention, and was chosen for a tournée dedicated to G. Verdi in the bicentennial, with the Orchestra of the Conservatories.In April 2017, for the “Beniamino Gigli: The Great Occasion” event, reserved for ten of the leading Italian Conservatives, his pupil, Matteo Castrignano, was selected as a representative of the Singing School of the Santa Cecilia Conservatory. In 2019 at the International Competition Beniamino Gigli, another of her students, Jun Young Kim, won the prize for best tenor.

She is a member of the Honorary Committee for the Lyric International Competition “Giacomo Lauri Volpi”.

For the series in DVD “I Segreti della Musica”, submitted by  Repubblica and l’Espresso and accomplished by Corrado Augias, she cured the sections “Strumenti d’autore”, for the numbers dedicated to Verdi, Puccini and Rossini.

In November 2018, she was elected Head of the Singing and Musical Theater Department of the Santa Cecilia Conservatory.