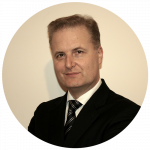 Silvano MANGIAPELO, born in Rome, Italy, studied at the Conservatorio di “Santa Cecilia” (Rome), “A. Casella” (L’Aquila), “G. Rossini” (Pesaro), and “O. Respighi” (Latina) where he obtained diplomas in the following disciplines: Composition, Organ, Piano, Choral conducting, and Band Arranging. He was then admitted into the “Accademia Nazionale di Santa Cecilia” obtaining an advanced diploma in Composition as a student of the illustrious F. Donatoni and A. Corghi. Also at this institution, he participated in advanced courses in orchestration and Wind Conducting.

At the “Università degli Studi di Roma Tor Vergata” he obtained a Masters diploma in the Musical Cultures of the 19th Century. After having an intense professional career as organist for different organizations ( AGIMUS, Accademia Organistica Romana) and winning the composition prize “P. VALENTI 1993 (2nd Edition)”, he has dedicated himself to Orchestra conducting having obtained his academic degree at the Conservatorio “A. Casella” (L’Aquila).

He has conducted symphonic concerts and theatrical performances at important venues in Italy and abroad, Bartòk Hall in Szombathely (Hungary), Konzerthaus in Vienna, Popejoy Hall in New Mexico (USA). He has taught at the conservatories of Trapani, Salerno, Latina, Potenza, Sassari, Campobasso. He has been vice-director of the Conservatorio L.Refice of Frosinone.