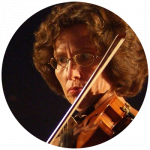 Kaethe Shore began her studies as a violist at ten with Peggy Spencer and Ernestine Breismeister in the very music loving community of Putney Vermont U.S.A. During 1976 – 77 she began her serious study of music in Boston where she was first violist in the New England Conservatory Youth Philharmonic Orchestra under the direction of Benjamin Zander. She continued her studies with Raphael Bronstein and Ariana Bronne at Hartt College of Music in Connecticut U.S.A. and with Sally Peck at the North Carolina School of the Arts in Winston Salem U.S.A. where she graduated with a Bachelor of Music in 1982.

In the United States she participated as a violist in the Festival for Chamber and Symphonic Music in Salt Lake City, Utah and for two summers in the Yellow Barn Music Festival in Putney Vermont. In the summers from 2003 to 2007 she was chamber music teacher for Camp Andantino Workshops for amateurs in Brattleboro Vt.

Participating in the North Carolina School of the Arts International Music Program in the summers of 1980 and 1981, she played symphonic and chamber concerts in North Carolina, Germany and Italy where she has lived since 1982.

In Italy she studied with Dino Asciolla at the Accademia Musicale di Città di Castello. She was violist in the string orchestra “Symphonia Perusina” for eight years and performed with the orchestra throughout Italy and Europe.

She was viola teacher at the Conservatorio G.B. Pergolesi di Fermo from 1989 to 2017 where she was also active throughout the years as coordinator of Sheila Nelson/Paul Rolland Workshops in string teaching, Chamber Music Marathons, the Conservatory Youth String Orchestra and many seminars and masterclasses.

Since 1996 she collaborates with the Scuola di Musica del Trasimeno music projects:

Since November 2017 she teaches viola at the Conservatorio Santa Cecilia in Rome.