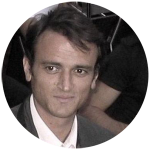 Professor at the Conservatory “S. Cecilia” in Rome;

First Oboe, English Horn at the Opera Theater in Rome;

Aniello Pinto undertakes the oboe study under the guidance of Maestro Cosimo Prinzo and graduated with highest honors from the Conservatory of Salerno. It is perfected later in Assisi with Maestro Pierre Pierlot and later at the Accademia Chigiana of Siena with Maestro Hansjorg Shellenberger.  At age 16, already the Principal Oboe of the Society of Folk Song by Roberto De Simone, he performs both in Italy and abroad in the show Cat Cinderella and, upon graduation, winner of numerous selections for a chair o fan Orchestra musician, began an intense concert activity at the most important opera and symphonic national bodies, such as the Teatro alla Scala in Milan, the Teatro San Carlo in Naples, Teatro Bellini in Catania, Haydn Orchestra of Bolzano, Orchestra Regionale del Lazio, Toscanini Foundation of Parma, Bari Symphony Orchestra, Orchestra Scarlatti of Naples, Orchestra of Italian Switzerland, Teatro dell’Opera di Roma. During this period he devoted himself to chamber music and is also the founder of the octet “The wind of Rome”, with which he performs brilliantly in Italy and abroad. At the same time he began the oboe teaching in Experimental Music schools and in 1992 he won the National Competition for Examinations and Qualifications for teaching the oboe in the Conservatory. In 2001 he won the competition at the Teatro dell’Opera di Roma as English Horn, collaborating there as Principal Oboe as well. Component of Chamber  Ensemble “Octet” the Rome Opera House, is repeatedly praised by the national press for the execution of the most important solo pages. He has played under the direction of illustrious Conductors such as Riccardo Muti, Giuseppe Sinopoli, Gianluigi Gelmetti, Donato Renzetti, Alain Lombard, Gary Bertini, Daniel Oren. He has recorded numerous soundtracks with artists such as Ennio Morricone, Nicola Piovani, Luis Bakalovю

Actually he is the first solo oboe and the Academy of Music San Pietro Cappella Giulia at the Vatican State, with whom he has performed soloist’ concerts of which he recorded live C.D. Currently combines the orchestral career as soloist and chamber and is a professor of oboe at the Conservatory “S. Cecilia” in Rome.