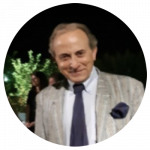 Since he was very young, he had the fortune to attend great Masters and Artists either for

studies and profession. He begins piano lessons under the guidance of Prof. Velia Gai

knowledge in Italian Opera repertoire traditions, he worked at Opera Theater in many professional roles:

At the age of 22, he was involved by M. Silvano Bussotti (Puccini Festival artistic director_Torre del Lago

Puccini) to train and direct the stable choir of the renowned main Festival (a role he held until 1985). This

activity gave him a great success. For this reason, in 1983, he was awarded with

Puccini Prize as a young

Opera House promised. This experience will give him the opportunity to work

alongside Masters such as

(whose directory in retirement, proposes him to take his place), the orchestra conductor Nicola Rescigno

(who wanted him at the Dallas Opera House). Moreover at that time, for seven years, he was also asked to be

part of the historical choir of the “Chapel of Pisa Cathedral, a very prestigious role, studying and performing

Gregorian style works as well as music by the greatest composers active in ‘500 /’ 600, working with M. Bruno

Pizzi (then permanent choir master at the Genoa Opera theater).

He than decided to apply for Composition “traditional course” degree, which he accomplished in just three

He took his Diploma degree in “Choral Conducting and Choir Direction” at the G. Verdi Conservatory in Milan

and in “Composition” at the L. Cherubini Conservatory in Florence.

With this remarkable artistic and cultural “baggage” he started, in 1981, the academic courses as a Conducting

student in Milan at the Giuseppe Verdi Conservatorium with M ° L. Rosada ( and A. Votto) with whom he broadens and

deepens above all the lyric-Opera repertoire. Here at Milan he also started violin studies after meeting the

violinist Paolo Borciani (first violin of the great Italian quartet). In 1983, still in Milan, he made his official

He then deepens the conducting studies focusing in classical-romantic repertoire with great Masters and schools such as:

In 1983 he conducted the first ever performance “with orchestra”, in modern times, of the rediscovered Messa di Gloria in F Major by P. Mascagni in his Livorno.

In 1985 he won the I.S.A. International conducting competition.

In 1986 he obtained the “Conducting Diploma” at the S. Cecilia Conservatorium in Rome with full marks.

In 1987 he was selected as Master in Orchestral Conducting held by Maestro J. Kalmar (student of the “great

School of Vienna ”by M ° Hans Swarowsky) at the Vienna State Conservatory, specializing in analysis and

He has been teaching singing, chamber music, composition and conducting for many years.

He than started to lectures in Music conservatorium, and also took care of training a young future orchestra

professors in various Italian State Conservatories. Since 2004, at the Mantova Music Conservatorium,

professional training; all this aimed to give students the opportunity to be extremely prepared to perform as

opera singers in the prestigious Bibiena Academic Theater in Mantua, one of the most representative of that

Since 1990, under his direction, various now famous opera singers have started

including: Alberto Gazale, Eleonora Buratto, Claudio Sgura and many others

He has worked with internationally renowned performers and singers, Orchestras and Symphonic Institutions,

Japanese, American, Austrian, Russian, interpreting a vast lyric and symphonic repertoire. Now he is Professor/conductor of orchestral repertoire in the Conservatory S. Cecilia in Rome.